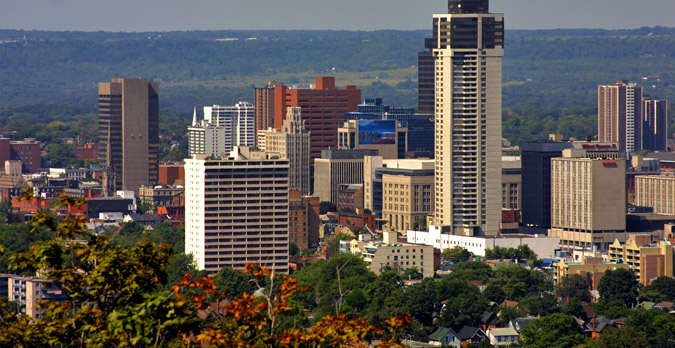 About five years ago, MultiLogic Energy Solutions upgraded all the lighting in nine of Effort Trust’s buildings with compact fluorescent bulbs and fixtures. At the time, the work helped to reduce the electrical lighting load by 30 per cent, and produced an annual savings of $190,000 across the group of buildings. Thanks to an Ontario Power Authority (OPA) incentive of $170,000, Effort Trust was able to realize payback within 1.5 years.
The price of electricity has continued to increase by about 8 to 10 per cent per year. While compact fluorescent lighting (CFL) is more efficient than incandescent bulbs, it is not as efficient as LED, nor does it last as long. CFLs have a life span of about 5000 hours, which means that in-suite lighting must be replaced every two years, while lighting in common areas must be replaced at least once a year. Due to the mercury content of CFL bulbs, disposal is also an issue.
“LED technology has matured over the last few years,” said Shane Blanchard, Vice President, Sales and Marketing, MultiLogic Energy Solutions. “New technology standards for LED lighting have driven the quality up, as well as the volume of production, which has also helped to lower the cost of LED bulbs.”

MultiLogic conducted a detailed lighting audit of Effort Trust’s buildings for in-suite, exterior and common areas. This included evaluating and counting fixtures and bulbs, analyzing
the electrical consumption of the existing fixtures, and conducting light level measurements in different parts of the buildings. They calculated fixture loads, operating hours for different fixtures, and determined the total electrical costs for the existing fixtures.
MultiLogic then put together a report with recommendations for the best available replacement light fixtures, and areas that would benefit from redesign to optimize lighting conditions. The report included suggested fixture selections to match the existing aesthetics, as well as options that would improve the lighting levels and energy efficiency. They also walked the client through the different component options in every area of each building.
“We provided the client with a proposal for each building, as we treat each building differently, and reviewed the various specifications for the new fixtures,” said Blanchard. “We discussed different types of fixtures for different locations in each building, as some areas would benefit from lighting upgrades, while others would work with standard LED fixtures."
The goal of the project was to change all lighting elements in every building to LED. Some of the work involved some simple changes, such as replacing LED lamps in garages, as well as parking garage re-designs to improve lighting levels and meet current Code requirements. In some cases, MultiLogic was able to replace lighting without wiring or electrical work.
“Although these projects were paid for by the resulting cost savings, much of the work could be classified as building renewal,” said Blanchard. “The easy solution may be to change a lamp but often the best long-term solution is to change the fixtures. In this way you get efficiency while also minimizing long-term maintenance and making the building more attractive for the tenants.” 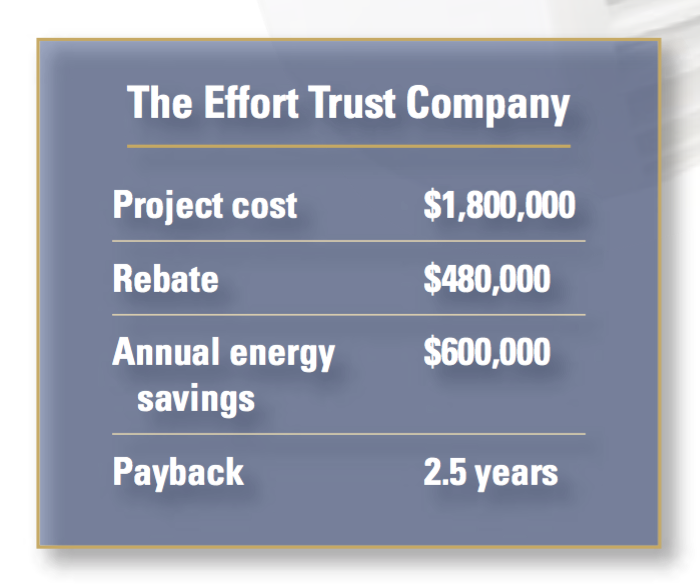 Once the specifications were finalized, MultiLogic submitted their findings to the Ontario Power Authority (OPA). This was required to obtain approval for incentives, which ranged from 25 to 50 per cent of the total project cost. The overall project cost was $1.8 million, and the project qualified for $480,000 in incentives.
“We chose to work with MultiLogic to upgrade our lighting because they handled all aspects of the project from start to finish,” said Hersel Tehranzadeh, Engineer and Project
Manager, The Effort Trust Company. “In addition to conducting audits and choosing the best lights for our buildings, they handled the incentive applications, which ensured that we were able to cover as much of the cost of the retrofit as possible.”
Upgrades were scheduled over a period of 12 months, so as to not overwhelm the property management company with too many projects at the same time. MultiLogic worked on two to three buildings at a time. It also handled the collection and removal of CFL bulbs, bringing the material to a central site that specialized in this type of disposal.

MultiLogic projected that the lighting upgrades would produce electricity savings of $600,000 per year. Payback was expected to occur within 2.5 years, with annual savings to increase as electricity prices rise. Effort Trust will also realize ongoing savings due to lower maintenance costs associated with replacing their CFL lighting with LEDs.
“Replacing CFLs with LEDs will also produce savings in maintenance costs,” said Blanchard. “LED bulbs can last from 50,000 to 70,000 hours, compared to CFLs that have a life span of only 5000 hours. This means that bulbs will not need replacement in common areas for six to nine years, while in-suite bulbs could last 20 to 30 years.”

While the existing light bulbs and fixtures were the right choice at the time they were installed, LEDs are much more energy efficient. With LED bulbs decreasing in cost and increasing in design options, it made a lot of financial sense to replace the bulbs and fixtures. In addition to improving lighting conditions and reducing maintenance costs, the new fixtures will reduce electricity costs across the group of buildings by $600,000 per year.
Story by David Gargaro, in collaboration with Shane Blanchard of MultiLogic Energy Solutions and Hersel Tehranzadeh of The Effort Trust Company
As published in Rental Housing Business Magazine, May 2016